A simple and easy method of detecting DNA molecules and cancer and other markers such as Alzheimer's disease will soon be available - thanks to the work of the Yokohama National University research group in Japan. According to an article published in the Applied Physics Letter published by the research group in the American Physical Consortium, they created a biosensor based on photonic crystal nanocrystals that can detect the absorption characteristics of biomolecules based on the movement of the laser wavelength. . 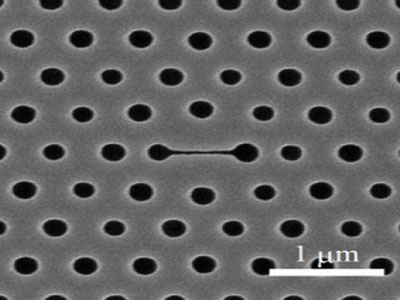 Scientists have developed new, simple, low-cost instruments that can detect DNA and other biomolecules by knowing the surface charge density or changes in solution pH.

Another important finding is that this type of nanolaser-based biosensor can detect the surface charge by laser radiation intensity, which can also be used to detect the absorption characteristics of biomolecules. The use of laser intensity to detect biomolecules is simpler and therefore less costly than conventional fluorescent labels or fluorescent spectroscopy used in sensors.

When the research team began to study the biosensors, their focus was not on the intensity of the laser radiation, because the radiation intensity was very sensitive to the quality of the laser, and it did not effectively sense the signal.

"At first, we focused on the behavior of wavelengths, but soon noticed that the intensity of (laser radiation) was affected by the pH of the solution and the polymer," said Toshihiko Baba, a professor at the Department of Electronics and Computer Engineering at Yokohama National University. "Our experimental results are highly reproducible, and it is interesting that we found that the wavelength and intensity of the behavior are independent of each other."

This result surprised the researchers. When they discovered this phenomenon, the protective layer of zirconium dioxide was deposited on the surface of the instrument by atomic layer deposition. After that, the instrument was used to detect high and low pH values â€‹â€‹and contained charged polymers. Solution. The results show that the protective coating is necessary to protect the nano laser from damage and to avoid unnecessary wavelength shifts.

To date, the group's work was the first report of surface charge detection using a photonic crystal sensor. "This allows nano-laser-based biosensors to detect the absorption properties of biomolecules through both wavelength and intensity parameters," Baba said. The results cover different physical parameters that researchers can use to further analyze biomolecule information.

And the technology "can only detect the absorption of biomolecules by measuring the intensity, which is a significant advantage compared to the traditional method," added Baba.

Traditional biosensing methods "rely on fluorescent labels that function on biomolecules," he said. â€œAccordingly, we can easily lock biomolecules through light stimulation. In fact, this is the standard method currently applied in the field of biology and medical diagnostics.â€ What are the shortcomings of traditional methods? The process of fluorescent labeling functionalization is often expensive.

In order to solve this problem, many research groups are devoted to the development of label-free detection methods, such as the use of resonance in optical resonators and plasmas. However, these methods require the use of spectral analysis of the wavelength or resonant light angle, which is still costly.

Nano-laser-based biosensors detect biomolecules by changing the intensity of laser light, so that neither labeling nor spectrometry is needed, thus greatly simplifying the detection process. This method has been validated in DNA molecules.

Referring to the potential applications of nano-laser biosensors, the team hopes that the technology "is a simpler method than ever to detect DNA molecules in human body fluids such as blood, detecting cancer and Alzheimer's disease marker proteins. Baba stressed. "We intend to further study the sensitivity, selectivity and stability of this phenomenon. If these problems can all be resolved, we will put the technology into practical use."

"Our research project will start in 2012 and will continue until 2016. The ultimate goal is to develop sensors based on photonic crystal nano lasers to detect biomarkers," Baba said. "We are further simplifying and developing the sensor and we hope to put it into practical use in the next few years."